In August 2013 I had the opportunity to treat two Liverpool legends in Jason McAteer and Robbie Fowler. As a Liverpool fan this was a fantastic opportunity to meet two individuals to whom I had watched almost every kick of their career. As a therapist I was solely focused on getting the best result for the client to ensure a pain free range of movement. This write up is a quick little insight to my experience on the day and how much more respect I gained for two very humbling people. 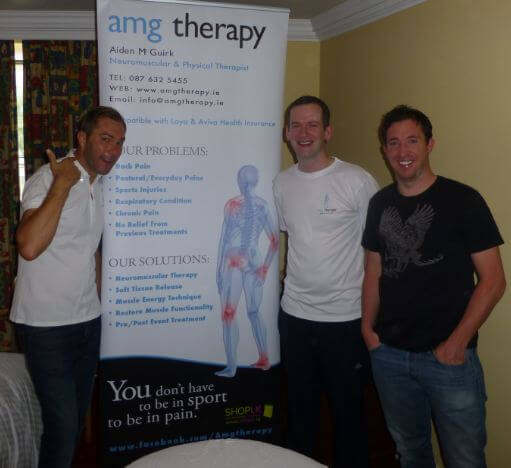 I was contacted by Jason to see if I could come and treat an injury that we had briefly discussed the night before at the fans event. They had planned to go golfing the next day but the weather was unkind and that left him a chance to get the injury treated before returning to Liverpool ahead of a busy weekend commentating for the opening game of the 2013/14 season vs Stoke city. The treatments went well, like all the treatments I do in the clinic I ensured that all the information was noted and was able to concentrate on why the pain is happening not just treat the pain and have it reoccurring because of the source not treated.

It was in their hotel that I had met them for treatment. They were great as they provided me with the photo opportunity for me to look back on with pride. I really love treating people and helping them recover from a pain or niggle that they have been experiencing, but it’s not every day you get to help out two former premier league players. As Jason and Robbie were both leaving the hotel after the treatment I had the opportunity to share a lift with Robbie and realise for just a minute what it felt like to be them, as the relatively quiet lift with just us in conversation was soon replaced with screams and cheers in the hotel lobby seconds later. I said my goodbyes to them as they engaged in autograph signings and that was that. It was a great honour for Jason to later tweet to his followers on twitter that he had treatment and was happy with it, this was a humbling and unexpected bonus to the day and he has followed me on twitter since and kept in touch. As a therapist your thanks is your referrals, Jasons referral was to Liverpool Football club at Anfield to treat in a legends game. That story is for another day and one that I will always be truly thankful to Jason for.